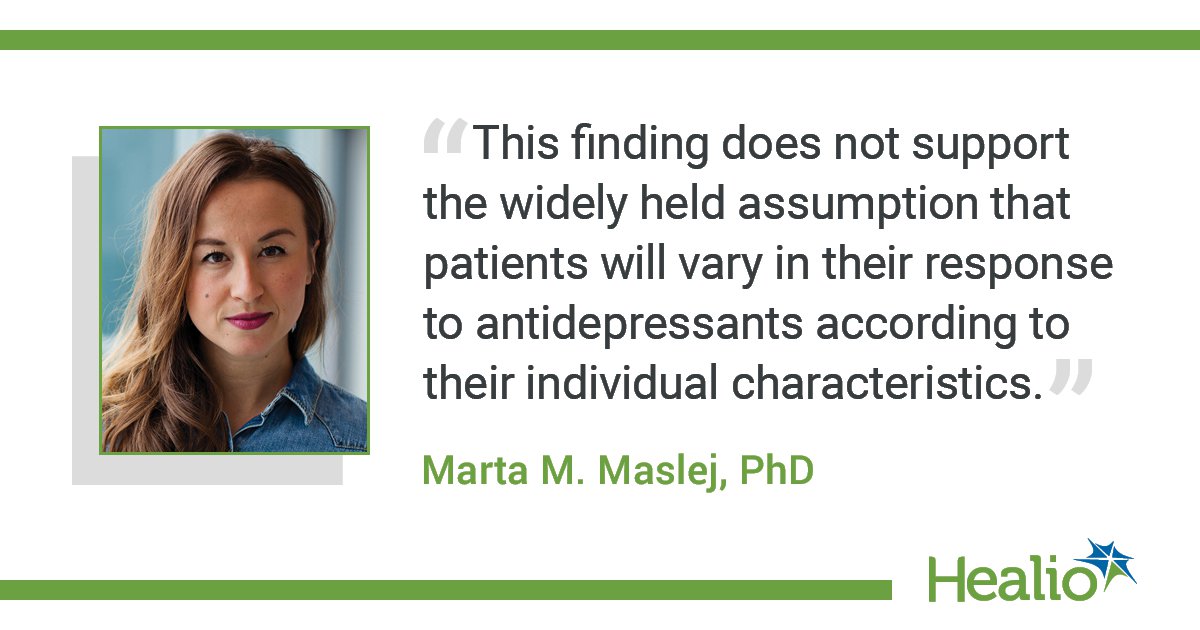 
Receive an email when new articles are posted on

Please provide your email address to receive an email when new articles are posted on .
We were unable to process your request. Please try again later. If you continue to have this issue please contact customerservice@slackinc.com.

Empirical support appeared lacking for personalizing antidepressant treatment based entirely on total depression scores, according to results of a meta-analysis of placebo-controlled randomized clinical trials published in JAMA Psychiatry.

However, researchers noted that this study cannot rule out the potential for treatment effect heterogeneity.

“Several methods have recently become available for quantifying and comparing variability in responses to medications or placebo (eg, two conditions in a randomized controlled trial),” Marta M. Maslej, PhD, of the department of psychiatry at the University of Toronto, told Healio Psychiatry. “These methods are being applied to assess variability in response to various mental health interventions, and we are likely to see many more applications in different health domains. Unfortunately, some of these methods can produce biased results if certain assumptions in the data are not met. Most prior publications of variability in response to antidepressants have applied these methods on data that do not meet these assumptions, so it was important to examine evidence for this variability using a more robust statistical approach.”

Maslej and colleagues aimed to evaluate the assumption of systematic variability in symptomatic antidepressant responses, as well as to determine whether variability is linked to major depressive disorder severity, antidepressant class or study publication year. They used updated data from a network meta-analysis of licensed antidepressant treatments among adults with MDD and searched seven databases from inception to March 21, 2019. International trial registries and sponsors, drug companies and regulatory agencies’ websites, and reference lists of published articles served as additional sources.

Data from 91 eligible trials featuring 18,965 participants were included. Results showed no significant difference for variability in response between antidepressants and placebo, which was consistent with a range of treatment effect standard deviations, depending on the link between the antidepressant and placebo effects. Further, the researchers observed no association between variability and baseline MDD severity or publication years. They noted increased variability of 11% for responses to noradrenergic agents vs. responses to selective serotonin reuptake inhibitors.

“We found no evidence that variability in post-treatment total depression scores among participants assigned to receive antidepressants was greater than among those assigned to receive placebo,” Maslej said. “This finding does not support the widely held assumption that patients will vary in their response to antidepressants according to their individual characteristics (eg, sociodemographic, clinical, genetic), and it calls into question our ability to personalize antidepressant treatments. Although this finding may be inconsistent with the variation in antidepressant outcomes often observed in clinical settings, it does not rule out the possibility of treatment effect heterogeneity.”


Receive an email when new articles are posted on

Please provide your email address to receive an email when new articles are posted on .
We were unable to process your request. Please try again later. If you continue to have this issue please contact customerservice@slackinc.com.