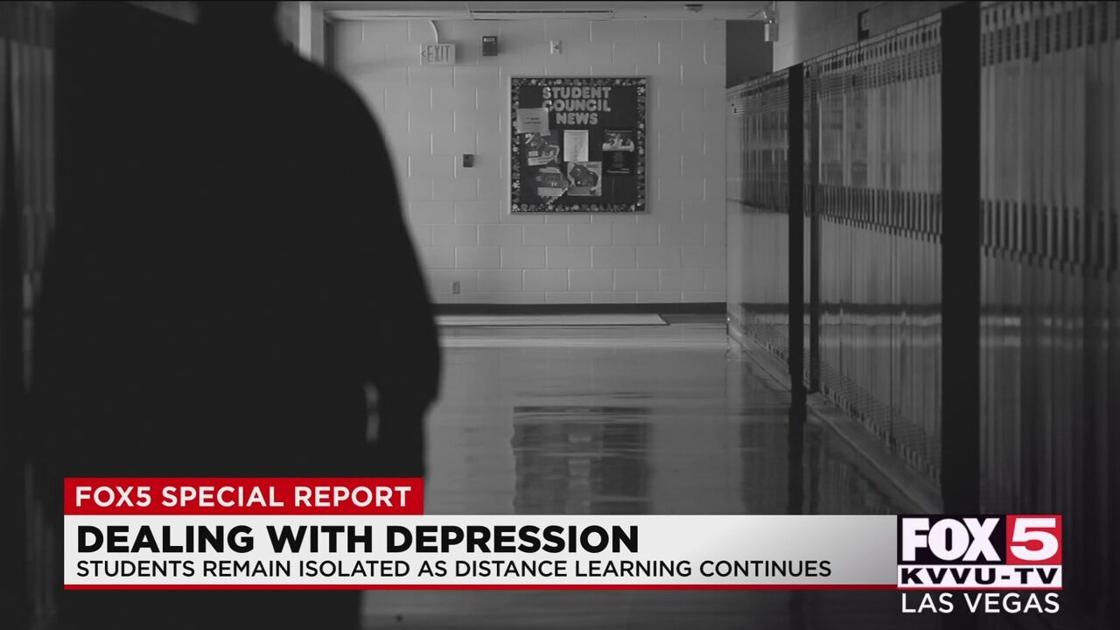 Dealing with Depression: The push for teens to return to the classroom | Las Vegas Local Breaking News, Headlines

LAS VEGAS (FOX5) -- It has been nearly a year since the COVID-19 pandemic shut down schools across the nation. While Clark County School District students in Pre-K through third grade may return to the classroom two days a week starting March 1st, no date has been set for older students.

There is a strong push to reopen schools for all kids. One big reason: student mental health.  Local experts say they are seeing more depressed kids. Most alarming, during the pandemic at least 20 CCSD students have taken their own lives. One experts contends getting students back in the classroom, back to some sense of normal, could help prevent suicides and improve the overall mental health of most students.

When school first shut down last March, 16-year-old Michael Saenz, a sophomore at Spring Valley High School thought it was great, but that didn’t last long.

“To be honest it only took me like a week to realize that we actually need school,” Saenz shared.

Now, nearly a year later, Saenz is pleading to anyone who will listen: reopen schools.

“It’s been really hard… like no football, no school, no friends, it’s been really stressful,” Saenz explained. Saenz is the oldest of six siblings and they’ve been battling connectivity issues since the beginning of distance learning. Instead of fighting to log-on to class, Saenz often feels like just giving up.

“I honestly really haven’t learned anything this year because I try to pay attention but it’s really hard because I’m not motivated,” Saenz admitted.

As his frustration mounts, the teen’s outlet for reliving stress is no longer an option.

“I usually channel my anger to play football,” Saenz stated.

“When we didn’t have it, I just lost a part of me because football was like what I was dreaming to do and I was using football to try to make my way into college,” Saenz added.

Though he wants to maintain his tough football exterior on the outside, on the inside Saenz said distancing learning has at times completely overwhelmed him.

“I am going to be honest. I had myself like balling my eyes out just like in emotion,” Saenz relayed.

“Reality is it is difficult for all these kids,” Dr. Michelle Fontenelle-Gilmer, a Harvard trained psychiatrist and Children's Medical Director at Southern Hills Hospital told FOX5.

Dr. Fontenelle-Gilmer normally sees about 40 school age kids a week, all who have been forced into at home isolation away from their friends and teachers.

“One of the very things that we look for when we look for depression normally is isolation,” Dr. Fontenelle-Gilmer stated.

“The numbers of suicides in Clark County are already a high number which was difficult to deal with to begin with. Now we are looking at double the numbers,” Dr. Fontenelle-Gilmer contended.

The company’s website states it is, “a suicide and self-harm prevention solution that leverages a combination of advanced artificial intelligence and human insight. These tools provide schools with rapid alerts about students who are at risk of self-harm.”

The program monitors a student's activity and alerts teachers anytime a student types something about self-harm. During the pandemic, there have been more than 3,000 alerts.

“If you see a kid who is showing all the signs of depression, then that is when you may want to ask directly… are you feeling like life is worth it? Do you feel like this isn’t going to get any better?” Dr. Fontenelle-Gilmer asserted.

Dr. Fontenelle-Gilmer is a big believer in getting kids back in the classroom, back into a social environment.

Saenz said while he’s dealt with depression this past year, he’s never thought of taking his own life. He believes the large number of students who have can’t be ignored.

“That has to show like a sign that we need to be back in school,” Saenz argued.

The CCSD has yet to announce a timeline or date of return for students fourth grade and above.