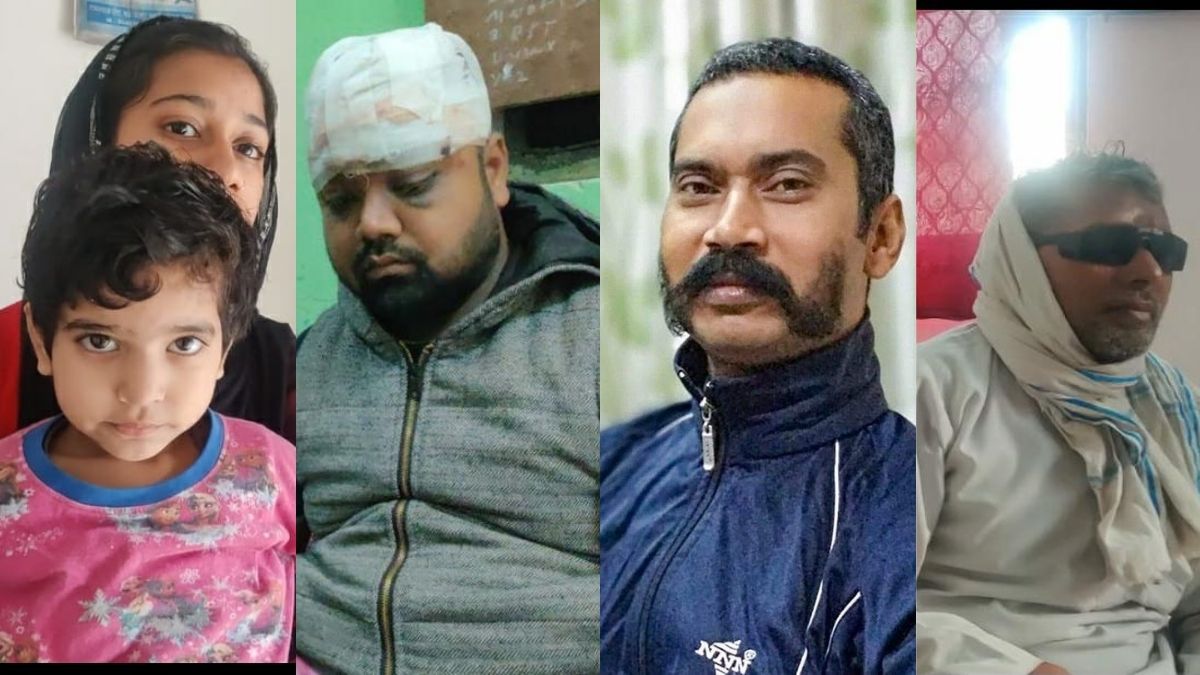 
New Delhi: Around this time a year ago, four-year-old Alisha would wait for her doting father Aamir to bring her toys, fruits, and take her out on evening strolls.

But today, Alisha’s feels dull and sorrowful, with the memory of her father’s blood-smeared body being taken away from their home indelibly etched in her mind.

Aamir Khan (30) and his brother Hashim (19) were killed in the northeast Delhi riots in February 2020, leaving behind a family still struggling to cope with the grief.

Poonam Bari’s case is no different. After losing her husband Ratan Lal, a head constable in the Delhi Police, during the riots, Bari says she struggles with anxiety.

The riots killed 53 people and injured 581. As many as 755 FIRs were lodged and 1,818 people arrested, Delhi Police said Friday.

The subsequent Covid-19 pandemic and the nationwide lockdown added to the miseries of the riot victims, who were left homeless in the aftermath of the violence.

A year after the deadly riots, ThePrint re-visited the homes of several families who were attacked and whose lives turned upside down as a consequence of the violence.

‘My 7-month-old child will never know her father’

Babu Khan, 60, sobbed while recalling the most gruelling journey of his life, when he carried the bodies of his two sons — Hashim and Aamir — for burial.

It was around 5 pm on 29 February when the two bodies were released after post-mortem by the GTB Nagar hospital. His sons were allegedly stripped and then butchered to death.

Their 18-year-old sister, Iqra, scrolled her phone to show the injuries of her brothers, who were killed by a mob when they were returning home to Mustafabad from their maternal grandparents’ house in Ghaziabad on 26 February. Their bike was thrown into the Bhagirathi Vihar drain near Gokulpuri area.

“My sons were beaten up as if they weren’t humans… I still wake up in the middle of the night thinking about how brutally they were murdered. A huge part of my soul left with them. What is left now? Aamir’s daughters are growing up, what should I tell them?” Khan asked.

“They made my sons strip to know their faith after asking them to recite Hanuman Chalisa. How will a Muslim know Hanuman Chalisa? They couldn’t recite so they killed both of them?” he asked.

Aamir’s five-year-old daughter Alisha said her father still comes in her dreams. “He says I should become a police officer.”

Aamir’s wife, 26-year-old Sabina, sobbed sitting on the railing outside their cramped house, remembering how Aamir left when she was over five months pregnant.

Today, her youngest, 7-month-old Alima, has no knowledge of her father, and Sabina has no way of breaking the information to her.

“How will I tell my youngest one how her father was ruthlessly killed even before her birth?” Sabina said.

On 24 February 2020, Brahmpuri resident Vinod Kumar’s five-year-old grandson fell sick. Vinod and his son Monu had some inkling of the violence taking place on the streets outside their home, but decided to quickly step outside and buy medicines, anticipating that a curfew could soon be imposed in the city. But what was supposed to be a quick errand turned into Vinod’s last day.

The father-son duo’s bike — with ‘Jai Sri Ram’ written on it — was intercepted by a violent mob, which beat them black and blue with rods and sticks. While Monu survived despite having his head smashed, his 51-year old father succumbed to injuries.

“Our family is only surviving on the compensation we received for his death, I am yet to receive compensation for the bike (Rs 65,000). And I have lost all sources of earning,” Monu told ThePrint.

The family used to run a DJ business, which took a hard hit due to the pandemic and lockdown. Moreover, Monu’s major clients were Muslims, but following the violence he has taken a conscious call to not go to any of the community’s weddings anymore.

“I am fearful. My family just has me to take care of them now, so I can’t afford to take any risks. Whenever any Muslim asks me to set a DJ floor in their wedding, I say no,” Monu said, adding that earlier he had plenty of Muslim friends, whom he no longer entertains.

He also announced that Rs 5 lakh each will be given to those who have been permanently disabled and Rs 2 lakh each to those who were severely injured. People who sustained minor injuries were promised Rs 20,000 each.

ThePrint reached Delhi Home Minister Satyendar Jain for a comment on the matter of compensation through calls and text messages, but there was no response until the time of publishing this report.

But a Delhi government official, who didn’t want to be named, told ThePrint, “There are several compensation claims, which the officials have been going through consistently. We are working on it.”

Nightmares of the horrific night

For many riot victims, the physical injuries sustained during the riots have been so grave that “moving on” isn’t just unfathomable, but also practically impossible.

Acid-attack survivor Mohammed Wakeel is one such person.

Wakeel, 52, was on his terrace with his family, looking down on the streets of Shiv Vihar, trying to gauge the enormity of the violence that engulfed the area. But before he could sense anything, a mob threw acid on his face, leaving him blind.

Reeling with stinging pain, all Wakeel wanted to do was yell as the acid stung his eyes, but, instead, he, with his six children and wife, rushed to the nearby Madina masjid and remained completely silent as the mob ran amok around them.

“I don’t know from where I got the strength to not scream in pain, but I knew that if I did, the mob would know we are hiding in the mosque and kill us right away,” Wakeel told ThePrint.

“We had two small goats with us, God bless them, even they remained quiet that day,” said his wife Mumtaz Begum.

A year on, Wakeel still gets nightmares of the horrific night. He might have lost his eyesight overnight, but still thanks Allah for keeping him and his family alive.

Poonam Bari, 36, was informed that her husband, 42-year-old Ratan Lal, was shot dead during the riots that broke out in Chand Bagh, by a neighbour.

“The neighbour rushed into our house and said ‘TV dekho didi (watch the news, sister)’. And when I did, the whole world came crashing down,” Bari said.

Lal, the eldest in the family, is survived by his mother, two brothers, a sister, his wife and three children.

On 22 February this year, Lal, a Delhi Police head constable, and Poonam would have celebrated their 16th marriage anniversary.

“I have remained numb, lost consciousness and have no idea how it’s come to a year without Ratan. I got into severe depression and still suffer from anxiety,” she said.

Poonam said she has been taking treatment and is trying hard to remain strong for her children. The family shifted back to Jaipur during the beginning of the lockdown and only Poonam kept travelling to Delhi for work.

“I don’t want anything, even if they don’t give the whole compensation, it is fine. I just want the martyr certificate for my husband,” she said.

Limping back from economic losses

Several victims of the riots described the economic toll of the violence on their lives as “monumental”.

A large parking lot in Shiv Vihar was set ablaze on day two of the riots, leaving several cars and auto-rickshaws parked there charred.

Mohammed Shakir, 28, owned an auto-rickshaw worth Rs 5 lakh, which was set afire at the parking space — the only source of income his family relied on. It was only six months later in August when Shakir was able to rent another auto to start earning again.

Another auto driver, Mohammed Rashid, had to give up his auto after he couldn’t pay the rent for the vehicle. His home, adjacent to the Ashok Nagar masjid, which was vandalised by a mob, was burnt down by rioters.

For a lot of families, the chaos surrounding the aftermath of the riots has meant their children have had to suffer in several ways — with their mental health as well as education.

A class 12 student at one of the schools that was vandalised in northeast Delhi, said education became practically impossible following the riots.

“The school was shut for a very long time due to the riots. Then it remained closed due to the pandemic. They started online classes, but only those who paid the fees could be a part of those classes,” said the 17-year old, who didn’t want to be named.

Like most students in his neighbourhood, he too couldn’t attend online classes for a major chunk of last year over his inability to pay the fees and lack of a smartphone.

“My parents’ earnings took a hit after the riots, so how could they pay my fees? It’s been a very difficult year, I am just trying to put my head down and focus on building some sort of a future now,” he said.

(With inputs from Aneesha Bedi)

Why news media is in crisis & How you can fix it

But the news media is in a crisis of its own. There have been brutal layoffs and pay-cuts. The best of journalism is shrinking, yielding to crude prime-time spectacle.

ThePrint has the finest young reporters, columnists and editors working for it. Sustaining journalism of this quality needs smart and thinking people like you to pay for it. Whether you live in India or overseas, you can do it here.