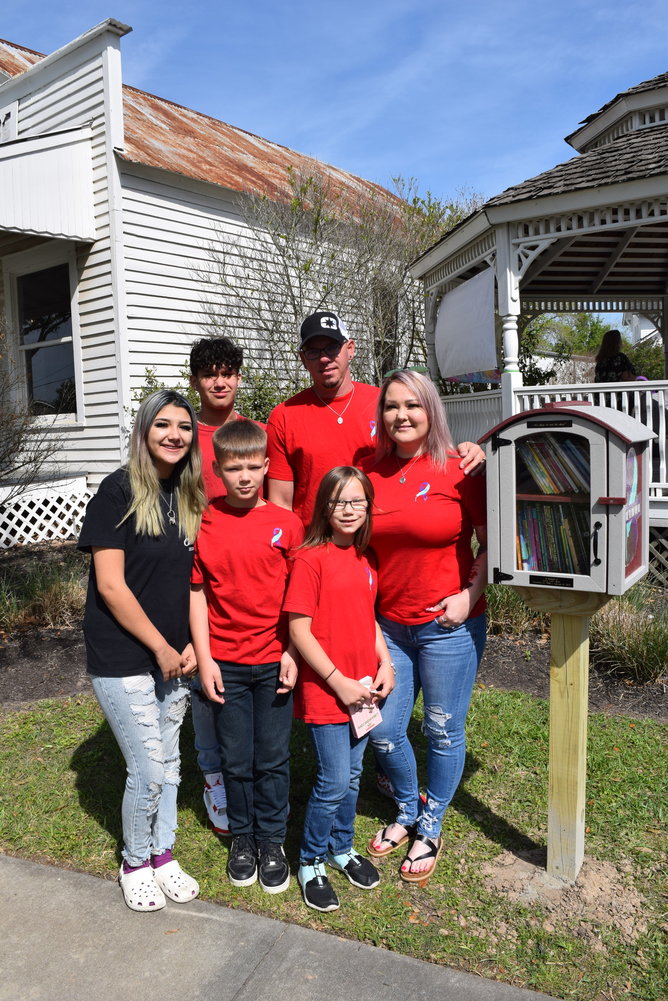 Katy residents gathered the morning of April 2 to honor Celia Rico, a local 14-year-old girl who died from suicide this past January after suffering from bullying and mental health issues. Celia – known by her family and friends as CiCi – was an avid reader and her mother, Deana Davidson-Maikranz, said she hoped the library would honor her daughter by sharing books with suicide prevention information while sharing CiCi’s love of reading.

“She (loved) any kind of genre,” Deana said. “I mean – it didn’t matter – if it had words on it, she was reading it. She loved to read poetry. She loved poetry, you know? She would read a lot of movie books that were books and then that were eventually turned into a movie.”

The Celia “CiCi” Rico Memorial Little Library is situated in Katy Heritage Park between the historic U.S. Post Office and the gazebo at 5990 George Bush Drive in Katy. Each book in the library is free to borrow and is stamped inside with a dedication to CiCi’s memory.

“They brought a whole bunch of brand new books and when you open it up, they have labels and it says, ‘in memory of Celia R. Rico. Your presence we miss. Your memory we treasure. Forgetting you never – Katy Junior High,’” said Katy City Councilmember Rory Robertson who helped coordinate the installation of the library.

Deana said CiCi suffered from bullying at school, but was a hero for others, often standing up to bullies when she saw other students having a hard time. A “Harry Potter” fan, CiCi saw herself as a Gryffindor and was always looking out for others.

Still, Deana said, Cici suffered from mental health issues, including depression, and fighting battles for herself wasn’t always as easy. CiCi was bullied about her mental health and the bullying never seemed to stop. It happened at school and even though she wasn’t supposed to have a phone, CiCi had somehow managed to get one and was bullied through Snapchat, a social media app wherein the messages disappear shortly after being sent, making it a preferred platform for cyberbullying.

Despite her depression, CiCi had a bright spirit, her mom said. She wrote poetry and had dreams of going to Julliard to become an actress. She was bright and loud and everyone knew when she was home because there was laughter in the house. In a short video shown to the Katy Times by Deana, CiCi is giggling so hard she was unable to speak. In another, CiCi excitedly showed off Deana’s wedding dress and other wedding supplies.

“She was so happy that we were getting married because she wanted to take (my husband, Chad Maikranz’s) last name,” Deana said.

Adrienne Davitz, president of the Katy Heritage Society which oversees the historic Katy Heritage Park, said that, while she didn’t know CiCi personally, the young girl’s story had touched her heart.

If you or someone you know is facing depression or having suicidal thoughts, help is available through the National Suicide Prevention Hotline at 800-273-8255.

CiCi's family is selling memorial T-shirts to aid in the financial costs associated with CiCi's passing. Those interested may purchase a shirt here: https://firebasehostingproxy.page.link/198886819888/forms.gle/6fymGbhMZC3nh2GJ8